Researchers at Karolinska Institutet have developed a method for assessing the effect of tamoxifen, a common drug to prevent the relapse of breast cancer [1]. The key lies in monitoring changes in the proportion of dense tissue, which appears white on a mammogram, during treatment. Women who show a pronounced reduction in breast density during tamoxifen treatment have a fifty per cent reduction in breast cancer mortality. This tool provides doctors with the possibility to assess whether a patient is responding to tamoxifen at an early phase of treatment. 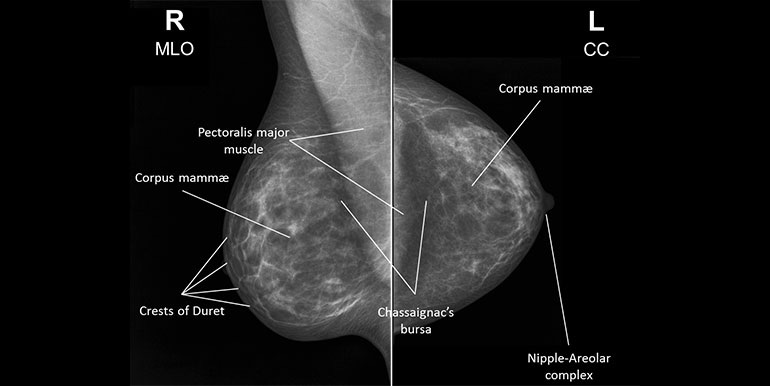 Case courtesy of Stefano Pacifici, Radiopaedia.org. From the case rID: 25751

Tamoxifen is a common hormone therapy drug that is usually given over a course of five years to prevent relapse in women who have completed their primary breast cancer treatment. However, no method has been available for assessing which women are likely to respond to the tamoxifen and not develop relapse of breast cancer. Researchers from Karolinska Institutet have now produced a possible way of doing just this.

The team looked into mammograms, which are X-ray images of the breast, for an answer. Breast tissue on a mammogram can be broadly classified into fatty or dense. The proportion of tissue which appears white is what contributes to 'density', whilst the black parts are mostly fat. Since tamoxifen has been repeatedly shown to induce a reduction in mammographic density, could it be that only women responding to tamoxifen treatment would exhibit a concomitant decrease in mammographic density?

The study included almost 1,000 postmenopausal women who had been treated for breast cancer. Roughly half of the group had been given tamoxifen. The women were monitored over an average of 15 years, after which 12.4 per cent (121 women) had died as a result of their cancer.

The team discovered that the difference in mammographic density between two mammograms taken after the initiation of tamoxifen was related to breast cancer survival. Women who experienced a pronounced density reduction of 20 percent or more upon initiation of tamoxifen were half as likely to die from breast cancer, over a span of 15 years, than those who experienced little or no change.

The researchers hope that their results will be used to assess which breast cancer patients are responding to tamoxifen treatment. Since the patient group already undergoes annual follow-up mammograms, no further examinations are needed.

"What's needed is accurate measurement of mammographic density, which isn't currently routine," says Per Hall, Professor at Karolinska Institutet's Department of Medical Epidemiology and Biostatistics. "Measuring changes in density can be a simple and cheap means of assessing the effect of the treatment. If a patient is not responding to tamoxifen, maybe they should be given a different drug."

The study was financed with grants from the Märit and Hans Rausing Initiative Against Breast Cancer, and the Swedish Cancer Society.