Tamoxifen and three similar drugs reduce breast cancer incidence by 38 per cent in women at an increased risk of the disease according to a Cancer Research UK study published in The Lancet [1]. 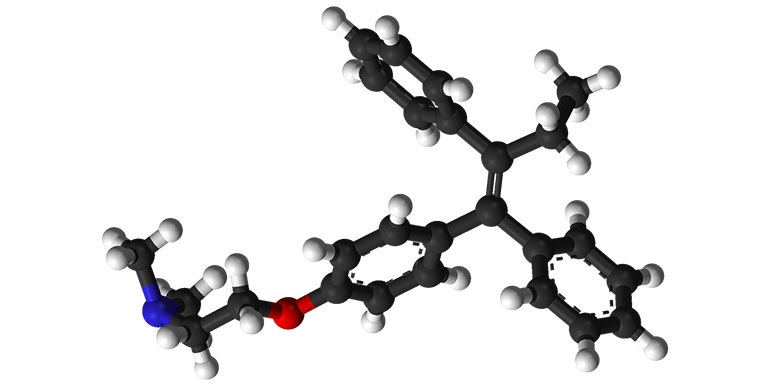 In the most comprehensive study to date scientists calculate that one breast cancer would be prevented for every 42 women who took the drug for five years and followed for a further five.

Researchers examined the records of more than 83,000 women to review the effectiveness of four specific drugs - tamoxifen, raloxifene, arzoxifene, and lasofoxifene. These are known as selective oestrogen receptor modulators (SERMs).

The first five years - when the women were taking the drug - showed the greatest fall in incidence, with 376 breast cancer cases versus 594 for those who were not taking a SERM – a fall of 42 per cent.

A benefit was seen in the five years after the women had stopped taking the drug: 211 breast cancer cases in women who had taken a SERM compared with 258 in those who had not – a 25 per cent drop. But this reduction was not as great as that seen during the first five years.

There was no effect on breast cancer deaths.

Researchers also examined the frequency of side-effects of the drugs. All four drugs significantly increased the risk of blood clots such as deep vein thrombosis. Only tamoxifen showed an increase in endometrial cancers. The increase in cases fell after women stopped taking the drug.

The drugs also led to a reduction in the risk of fractures. The direct comparison of tamoxifen with raloxifene showed that raloxifene is less effective than tamoxifen, but has fewer side-effects.

Women currently use tamoxifen for five years as part of their breast cancer treatment but it is not approved as a preventive drug for the disease in the UK.

NICE issued draft guidance in January 2013 saying tamoxifen should be recommended for women at high risk of breast cancer. Final guidance is expected later this year.

It is estimated that around eight in every 10 of the almost 50,000 women diagnosed with breast cancer every year in the UK will have ER positive breast cancer.

Professor Jack Cuzick, lead researcher based at the Queen Mary University of London, said: “These are very encouraging results and pave the way for more widespread use of these drugs in high risk women in a manner similar to the way statins and blood pressure lowering drugs are used to reduce the risk of heart disease and stroke.”

Hazel Nunn, Cancer Research UK’s head of health information, said: “These results provide some of the clearest evidence to date of the ability of these drugs to prevent breast cancer. The study also offers clarity on the frequency of side effects that can be expected from these drugs. Breast cancer is the most common cancer in the UK, and research like this has the potential to reduce the number of women diagnosed with the disease in the future.

“We look forward to the final guidance from NICE and hope this marks the time when women have more options to reduce their risk of breast cancer. These drugs have a range of side-effects though, so they will not be suitable for all women. We urge them to discuss their options with their doctors.”